Teslacigs Invader series has a new product which is the Tesla Invader 2/3. This device has been upgraded and the performance is being improved. The battery scheme for the product is the best improvement. You are able to switch between a dual battery back and a triple battery back.

Design and Quality
This is an awesome device because you can use either three or two battery to power it. You will get a maximum power output of 240 watts when using two batteries or 360 watts when you use three batteries for the box mod. Once you take a closer look on the Tesla Invader 2/3, you will notice that the back has a trapezoidal shape when using three batteries. There also will be no hump at the back when you only use two. There are no magnets in this device since the back is held on by friction. 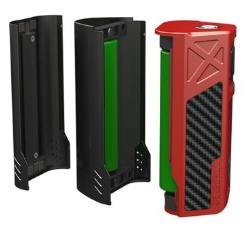 Removing the battery is easy. When you remove the battery when you use three, you just have to place your finger on top of the battery back and push it down while holding the mod. The battery back will then loosen up and slide off. It has been placed firmly on the mod so you do not have to worry about accidentally sliding it off. When you remove the battery when you use only two, it is a bit challenging and needs a little care. The back is thinner so a little push might be needed. You will have to use a charger when you need to charge the device because this mod does not have a USB port.

The Tesla Invader 2/3 has been designed with a variable voltage mod. There is no support for temperature coils on this device. The device does not have a digital screen so there is no way to view the details of the device’s status and it has no buttons for voltage adjustment.

You get to set the device’s voltage using the potentiometer. This feature is located at the bottom front of the device. This mod is detonated with 3 volts to 8 volts and what is convenient about it is the ¼ marking on the dial in between numbers. You are not able to clearly identify the settings of the device since the potentiometer does not have the detents. You will notice that it is so easy to use the potentiometer in just using your fingertips. There is enough resistance with the voltage setting so it means that the voltage will not change inadvertently. The coils that you are using will be the base of the wattage set for the device.

A LED light is located at the bottom of the body. This makes you know better the usage of the product. The fire button is located at the upper part of the front side on the device. It has a very convenient location and easy for you to locate where it is. 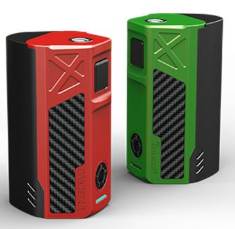 The Tesla Invader 2/3 has different sizes when using two or three batteries. When you use two batteries for the mod, the size is 35mm by 42mm by 85mm. It is 50mm by 42mm by 85mm when using three. The box mod is powered by an 18650 battery and has different power outputs. When using two batteries, your maximum power output is 240W and 360W when using three batteries. You get a voltage output range between 3-8 volts when using the device. Your LED light indicator is blue colored and there are also different kinds of protection features that come with the Tesla Invader 2/3. You get an over puffing and reverse connection protection from this device. Aside from that, it also comes with an atomizer short circuit protection, low voltage alert, overheating and over-current protection.

What’s in the Box

This box mod has definitely been improved. This is great for those who want to DIY especially with the design. There may be other mods similar to this one that is available on the market today but the Tesla Invader 2/3 is one of the best. You get to purchase this box mod at http://www.urvapin.com/ for only $38.99.

Did you find apk for android? You can find new Free Android Games and apps.
Share 0

Why You Need To Try Tobacco Flavored E-Liquids

Saa K Jun 10, 2021
If you are an avid tobacco enthusiast, the chances are that you’ve heard about snus. This tobacco pouch, invented…
E Cig Tank Coil

All Melon E-Juice by Naked 100 Review